The cross-valley recreation path known as CV Link has won a $10.9 million state grant, enough to fund more than 10 percent of the project’s costs.

The cross-valley recreation path known as CV Link has won a $10.9 million state grant, enough to fund more than 10 percent of the project’s costs and bring the project’s total secured funding to three-quarters of its estimated $99.3 million price.

The award for the 50-mile path along the Whitewater River was the largest project approved Wednesday by the California Transportation Commission as part of its Active Transportation Program, according to the Coachella Valley Association of Governments, the agency spearheading CV Link.

Construction on the path meant for runners, walkers, cyclists and people in low-speed electric vehicles has yet to begin, but officials said the latest fundraising success places them in good shape to see CV Link open to users several years from now.

“We believe it’s a tremendous asset to our region, and to know that other entities — whether it’s state or federal — feel the same way is very important to us,” Jan Harnik, a Palm Desert council member and CVAG chairwoman, said by phone Wednesday afternoon after attending the Transportation Commission meeting in San Jose with CVAG Executive Director Tom Kirk and Riverside County Supervisor John Benoit.

The grant was part of $183 million going to 126 projects throughout California, a list the state selected from 771 projects seeking more than $1 billion, according to CVAG.

“Since we started down this path, we’ve been realizing that the timing is perfect,” Benoit said. “There are just so many places that are trying to incentivize active transportation, which means getting out of cars, and walking and biking and riding.”

CVAG has now lined up $75.9 million for CV Link and needs to secure less than $24 million more to fully fund the project. Along with earlier state support, other funding sources include the Desert Healthcare District and air-quality mitigation money from the Sentinel power plant outside Desert Hot Springs.

“We believe we will see the rest of the project funded,” Benoit said. “It will be funded from outside the Coachella Valley. That’s a good thing when you can bring back federal dollars that would have gone somewhere else if we’d not had a project that qualified.”

Earlier this summer, CVAG raised the estimated cost of the project by $20 million to nearly $100 million to pay for additional safety features and improve access points along the path. Another $1.2 million in ongoing annual maintenance and operating costs were also added as part of the project’s draft master plan.

The project’s engineering phase is already underway, and construction of the first phase, which would run from North Palm Springs to Coachella, is anticipated to begin in 2017. Later phases could extend the path farther east and north into Desert Hot Springs.

Kirk, who has described CV Link as the largest project of its kind in the country, said CVAG has applied for federal grant money and plans to seek more state support in the next round of grants through the Active Transportation Program.

As with other transportation projects, Kirk said CVAG isn’t waiting to have all the funding lined up before it begins construction.

“We have plenty of funding to get major sections of CV Link done well before we needed the funding,” he said. “It usually takes a lot longer than it has in this project.” 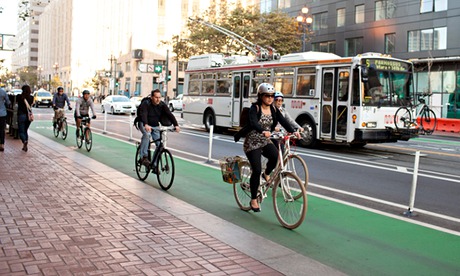 Four reasons US business leaders want to import Danish-style cycling At long last, cycling is being supported by American business – not […]

As Park City grows and develops there is an increasing need and demand for recreational hiking and biking trails, trail-head parking, neighborhood […]